PLEASE TAKE NOTICE that the Annual Election of the Greenwood Lake Joint Fire District will take place on December 8, 2020. between the hours of 6:00 PM and 9:00 PM at the firehouse located at 17 Mountain Lakes Lane, Greenwood Lake, New York for the following purpose:

All residents of the Greenwood Lake Joint Fire District, who are duly registered to vote with the Orange County Board of Elections on or before November 22, 2021 shall be entitled to vote at the election.

PLEASE TAKE NOTICE that the Greenwood Lake Joint Fire District shall hold a public hearing to discuss the contents of its proposed budget for 2022. The Public hearing will be conducted at the firehouse located at 17 Mountain Lakes Lane, Greenwood Lake, New York, at 7:30 PM on October 19, 2021. A copy of the proposed budget is available at the offices of the Town Clerk of the Town of Warwick and the Village Clerk of the Village of Greenwood Lake and at the office of the Fire District Secretary where it may be inspected by any interested person. In addition, copies of the proposed budget for 2022 will be available at the aforesaid public hearing. All interested persons are invited to attend.

PLEASE TAKE NOTICE that the Annual Election of the Greenwood Lake Joint Fire District will take place on December 8, 2020. between the hours of 6:00 PM and 9:00 PM at the firehouse located at 17 Mountain Lakes Lane, Greenwood Lake, New York for the following purpose:

All residents of the Greenwood Lake Joint Fire District, who are duly registered to vote with the Orange County Board of Elections on or before November 16, 2020 shall be entitled to vote at the election. 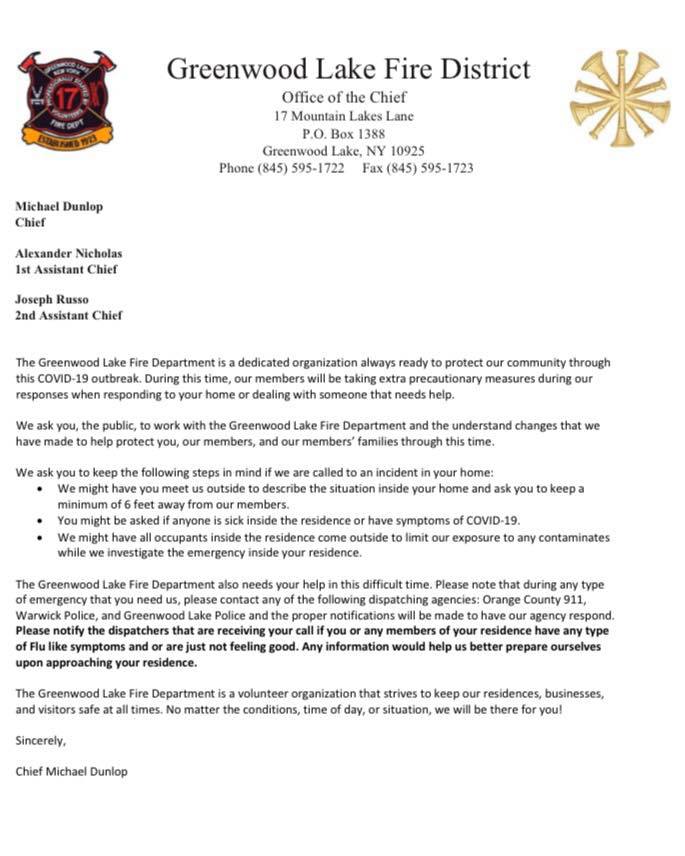 The DEC burn ban is in effect as of March 16th until May 14th.

Please adhere the the posted guidelines per the DEC.

Open burning is prohibited in New York, with several exceptions:

Campfires less than 3 feet in height and 4 feet in length, width or diameter are allowed.

Fires cannot be left unattended and must be fully extinguished.

Only charcoal or clean, untreated or unpainted wood can be burned.

Ceremonial or celebratory bonfires are allowed.

In towns with a total population less than 20,000, you may burn tree limbs with attached leaves. The limbs must be less than 6 inches in diameter and 8 feet in length (also referred to as brush). However, this is not allowed from March 16 through May 14 due to the increased risk of wildfires.

The practice of burning large piles of brush collected from local residents at town or county transfer sites is prohibited. The individual landowners in small towns may burn their brush on site as discussed above. Downed limbs and branches generated at a transfer site are also allowed to be burned on site with the same restrictions

Please note: While most firewood must be untreated, some firewood is heat treated (kiln dried) to control invasive insect species if it is to be transported over 50 miles. Heat treated firewood is not intended to be prohibited. However, the burning of chemically treated wood such as pressure-treated lumber and plywood is prohibited.

Do Not Burn Household Trash

DEC recommends that you recycle all appropriate materials (such as newspaper, paper, glass and plastic) and compost your organic kitchen and garden waste.

Burning leaves also is banned in New York State. We encourage you to compost leaves.

Disposal of flags or religious items in a small-sized fire is allowed if it is not otherwise prohibited by law or regulation.

Organic agricultural wastes may be burned on-site where they are grown or generated, including brush and wood produced by clearing fields and other activities.

Fires must be located on contiguous agricultural land larger than 5 acres, and the materials capable of being fully burned within 24 hours.

The burning of pesticides, plastics or other non-organic material is prohibited.

The use of liquid petroleum fueled smudge pots to prevent frost damage to crops is allowed.

Burning tires and other wastes for smudge is prohibited.

Individual open fires to control plant and animal disease outbreaks are allowed as approved on a case-by-case by DEC, upon the request by the Commissioner of Agriculture and Markets.

Prescribed burns - the burning of forest land to achieve a vegetative or wildlife management goal - can be performed but only in accordance with DEC regulations. Check with your regional DEC office.

With some restrictions, fire training burning activities are allowed in accordance with guidance from NYS Dept. of State's Office of Fire Prevention and Control. The Fire Services Bureau may be reached at 518-474-6746.

Towns, villages, cities, and counties can pass ordinances that are stricter than the open fires regulations. You should check with local authorities to find out if local law requires a permit or prohibits open fires.

Explosives, or other dangerous contraband, may be burned on an emergency basis only by police or other public safety organizations.

While a permit is not required under this regulation, the Environmental Conservation Law (ECL) requires that a permit be obtained from DEC if you plan to burn brush under the exception and you live in a town which is totally or partially located within the boundaries of the Adirondack and Catskill Parks which is designated as a "Fire Town" under the ECL (see list below). In addition, any local requirements or restrictions would apply.

Delaware County, the towns of Andes, Colchester, Hancock and Middletown;

Greene County, the towns of Hunter, Jewitt, Lexington and Windham;

Herkimer County, the towns of Ohio, Russia, Salisbury and Webb;

Oneida County, the towns of Forestport and Remsen;

Saratoga County, the towns of Corinth, Day, Edinburg and Hadley;

Sullivan County, the towns of Neversink and Rockland;

Washington County, the towns of Dresden, Fort Ann and Putnam.